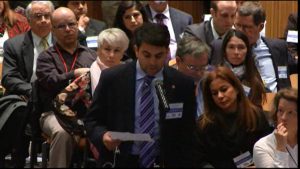 Victory! CDC’s Advisory Committee for Immunization Practices (ACIP) voted unanimously to recommend the Meningitis B vaccine for at risk populations. In June, the panel will evaluate broader recommendation for college students.
Seth had the honor of reading the comments prepared by Neal Raisman, who unfortunately had to return home to Columbus, and was not able to stay for the meeting.
“My name is Neal Raisman. In 2005, I was the father of two. Today, I am the father of one. On the morning of September 27th, my youngest son Isaac woke with a headache, and was dead of Meningitis by 4:30 the same day. I found his body. He had less than 12 hours from the time he told us he had a headache until he died. A vaccine would have prevented his death.
It’s an epidemiological story you all know too well, but it’s a personal story I never wanted to know.
Today I am here as a spokesperson for the Global Healthy Living Foundation, and together we are asking this committee to endorse the FDA labeling recommendation which is for immunization to prevent invasive disease caused by Neisseria Meningitidis Serogroup B for individuals 10 through 25 years of age.
My words here today, and your committee meeting, could not come at a more immediate time. Eight days ago Lauren Jones, a student at the University of Oregon added her name to the list of those who have died of meningitis. Two days ago, a UC Davis student was diagnosed. At the University of Oregon, students who have the money will be able to get the vaccine for meningitis B. Those who do not will remain exposed to its ravages.
Since the FDA approved the vaccine for meningitis strain B in November 2014, people have died. Did they die because the ACIP didn’t act? Perhaps. Although the vaccine was available to those who could afford to pay for it, without your recommendation, as you know, insurance companies and Medicaid won’t cover the cost. It is not difficult to conclude that informed people with the money to pay for the vaccine have lived, and those who can’t afford it, or don’t know about it, have died. This is counter to everything that ACIP, the CDC, the FDA and the NIH stand for.
Your endorsement vote for the FDA recommendation would realign this committee with its mission and with the values and expectations of parents with college-age children. We expect the government to tell us when the health of our children is in danger, and then help us decide what to do.
Because meningitis is nearly always fatal, the low numbers of people affected mask the toll these cases take on families such as mine and on communities. My job today is to help you understand the depth of the emptiness we parents feel every day, and the heartache we feel for those parents who are about to join our ranks – the ranks of families minus one.
Please act so other young people and their families are not so violently affected by meningitis. Please act so that there are no more Isaac’s and Lauren’s. Thank you.”