Patients, advocates and health care providers came together on the steps of the state capitol in Albany, NY, August 3rd, to call on Governor Andrew Cuomo to sign into law legislation aimed at ensuring that patients and their doctors have the final say in their medication treatment plans.

During this past legislative session, both the New York Assembly and Senate unanimously passed legislation designed to put parameters around the insurance industry practice known as step therapy or fail first.

Step therapy forces patients to try cheaper medications other than what their doctor has prescribed before an insurer will cover the cost of the originally recommended treatment. When applied inappropriately, patient health can be negatively impacted due to the delay in receiving the care they need.

“Insurance companies should not be practicing medicine by dictating what drugs we have access to for our individual medical conditions,” said Kathleen Arntsen, Executive Director of the Lupus and Allied Disease Association. “I personally have suffered vision loss and the possible loss of my eye due to step therapy protocols. It’s time to put prescribing back where it belongs– in the hands of doctors who are educated and ethically bound to treat us appropriately.”

When signed into law, the legislation will give doctors a transparent process to seek exceptions for patients needing a particular treatment. The bill does not ban step therapy or the number of steps an insurer can implement. 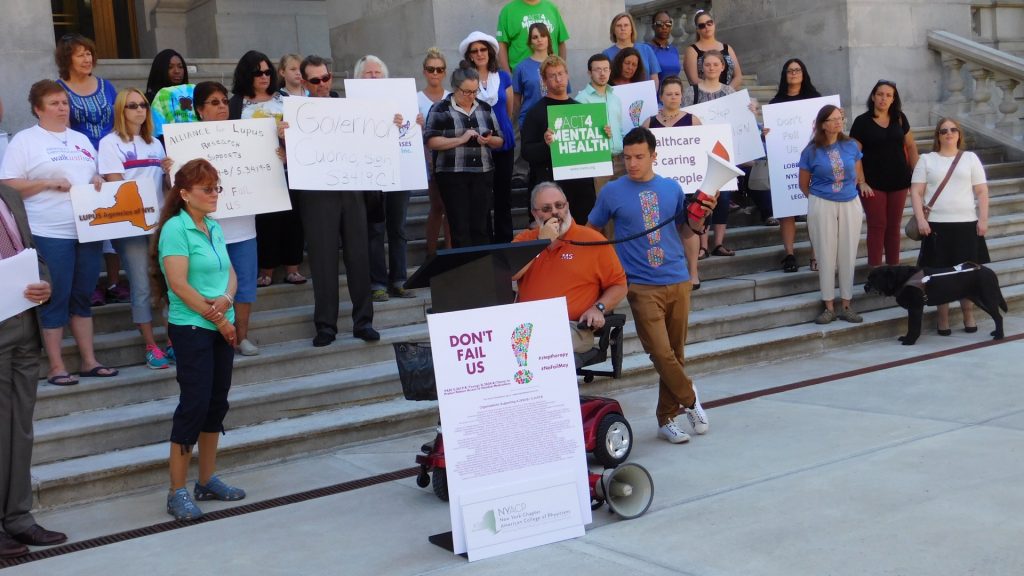 “We hear far too often from patients in our organization that they’ve been denied the medication their doctor has prescribed,” said Stephen Marmaras, Director of State and National Advocacy, Global Healthy Living Foundation. “This legislation makes sense because it ensures that patients will get the right medication, at the right time.”

Step therapy use is increasing steadily. In 2010, nearly 60% of commercial insurers were using step therapy. In 2012, 54% of plans reported using for drug to treat cancer, up from 36% in the prior year. Step therapy can affect a wide range of medical conditions, including but not limited to, auto-immune diseases, cancer, mental health, and HIV/AIDS. Cases of step therapy have been documented in patients of all ages.

New York joins other states who have passed similar legislation in 2016, including Illinois, Indiana, Missouri and West Virginia.

S.3419C/A.2834D is supported by nearly 80 patient and provider organizations from across New York State and the nation.

< Prev
ALL
Next >
Accessibility by WAH